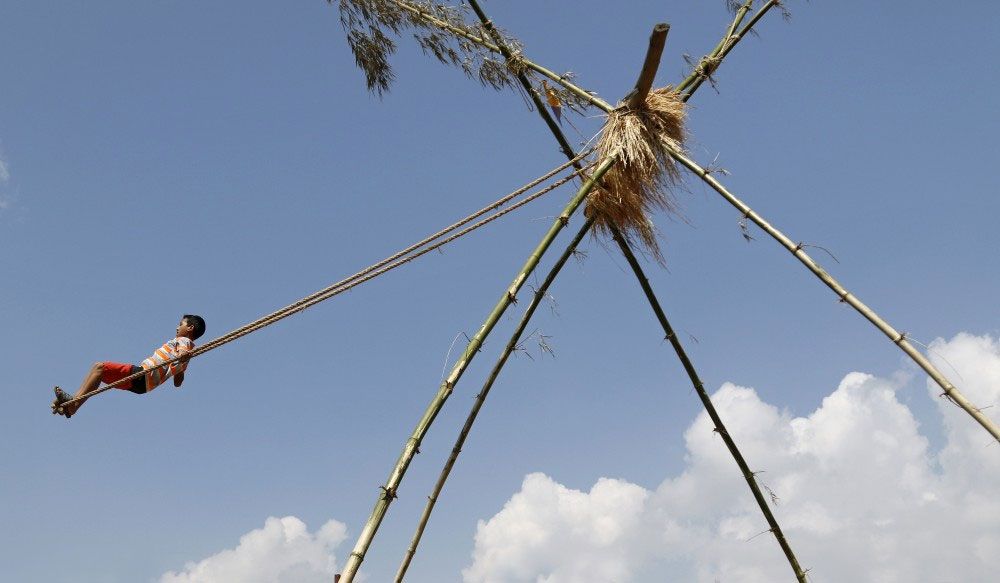 Dashain or Vijaya Dashami is an auspicious annual festival that is considered one of the most significant festivals in Nepal. Dashain usually falls in the Nepali month of Aswin (September or October) and celebrated by all the Hindus across the world. Dashain begins from bright lunar fortnight (Shukla Paksha) and ends on the full moon day (Poornima) according to the Nepalese annual calendar.

Dashain is celebrated for fifteen long days, and there is a vast significance of this festival in Hindu mythology. Goddess Durga- the symbol of power- is worshiped during this festival. Dashain is cherished to mark good over evil with the death of a demon called Mahisasur by Goddess Durga. Thereby, the first nine days of Dashain represents the continual battle between the demon and goddess and ultimately defeating the demon on the tenth day. Hence Dashain is also called Vijaya Dashami, which is derived from Sanskrit and means victory on the tenth day of the Hindu month. There are a series of events under Dashain that include Ghatasthapana, Fulpati, Maha Asthami, Maha Navami, and Vijaya Dashami. Each day is considered essential and also has different rituals and significance.

The first day of Dashain is known as Ghatasthapana, it is performed at a precise auspicious moment, and this day also marks the beginning of the festival. On this day, the Kalash or holy water pot denoting goddess Durga often with her image engraved on the side is placed in the prayer room. The highlight of this day is that people follow the traditional prayers and filling a vessel with sand and sow maize and barley seeds and keep it covered and worship for ten days.

People observe regular rituals till the seventh day, so, after about a week is Fulpati, this day is also known as Saptami because it falls on the seventh day. On this day, as per the rule of the country, the priests would carry the Royal Kalash along with Jamara; Banana stems and Sugar cane tied with red cloth from the Gorkha district to Kathmandu by walking for three days. After coming to Kathmandu, there will be Fulpati parade held which is also witnessed by many government officials.

The eighth day of Dashain is known as Maha Asthami or Asthami. On this particular day, goddess Kali is worshipped by making a sacrifice of livestock like hen, duck, goat, and buffalo. The night of this day is called the ‘Kal Ratri’ meaning black night. People take the sacrificed livestock at home and consume it as holy food believing to bring them good luck.

The ninth day of Dashain is known as Maha Navami or Navami. By this day, the Dashain celebration would have reached its highest. All temples of mother goddesses are swarming with people right from early morning till nightfall. On Maha Navami, the military sacrifice the buffaloes and goats in large numbers to goddess Durga and people also follow the tradition of worshipping factories, vehicles and machines. It is also the only day of the year when the Taleju Temples in Kathmandu, Patan, and Bhaktapur will be open to the public.

The tenth day of Dashain is the main day, also known as Dashami or Vijaya Dashami. This is the main day commonly called Tika (a mixture of rice, curd, little sugar, and red vermillion). Traditionally, people in Nepal observe Tika after the priest determines an auspicious time for it. Tika is the most important and pleasing day in Dashain. The family gathers in one place to put Tika and Jamara from elders and receive blessings. Then people will go to their relatives’ homes and continue to receive Tika and blessings. Everyone on this day gets busy celebrating Tika until nightfall. People put on the new and best clothes esp. for this day, and every household enjoys a delicious meal.

Although Tika is considered the last day of Dashain, from this day onwards, there begins the gathering and feasting among families and friends. And receiving Tika continues for another four days until Kojagrat Purnima (Full Moon Day) that formally marks the end of the biggest festival Dashain. On this day, the leftover Jamara and Tika are disposed of according to the religious tradition. Kojagrat means ‘who is awake’ and on Kojagrat Purnima, devotees worship Goddess Mahalaxmi (Goddess of wealth) at their homes in the evening and keep vigil the whole night. It is believed that the goddess will visit and bless the people who are found observing the overnight vigil.

Besides the tradition, Dashain is all about a long break, pleasant weather, feasting, gathering, flying kites, gambling (in a decent way of course!), shopping, new clothes, enjoying the conventional bamboo swings, etc. Dashain is also the best time for a family reunion and spending quality time together. People in Nepal love Dashain and every year wait for this festival like never before.