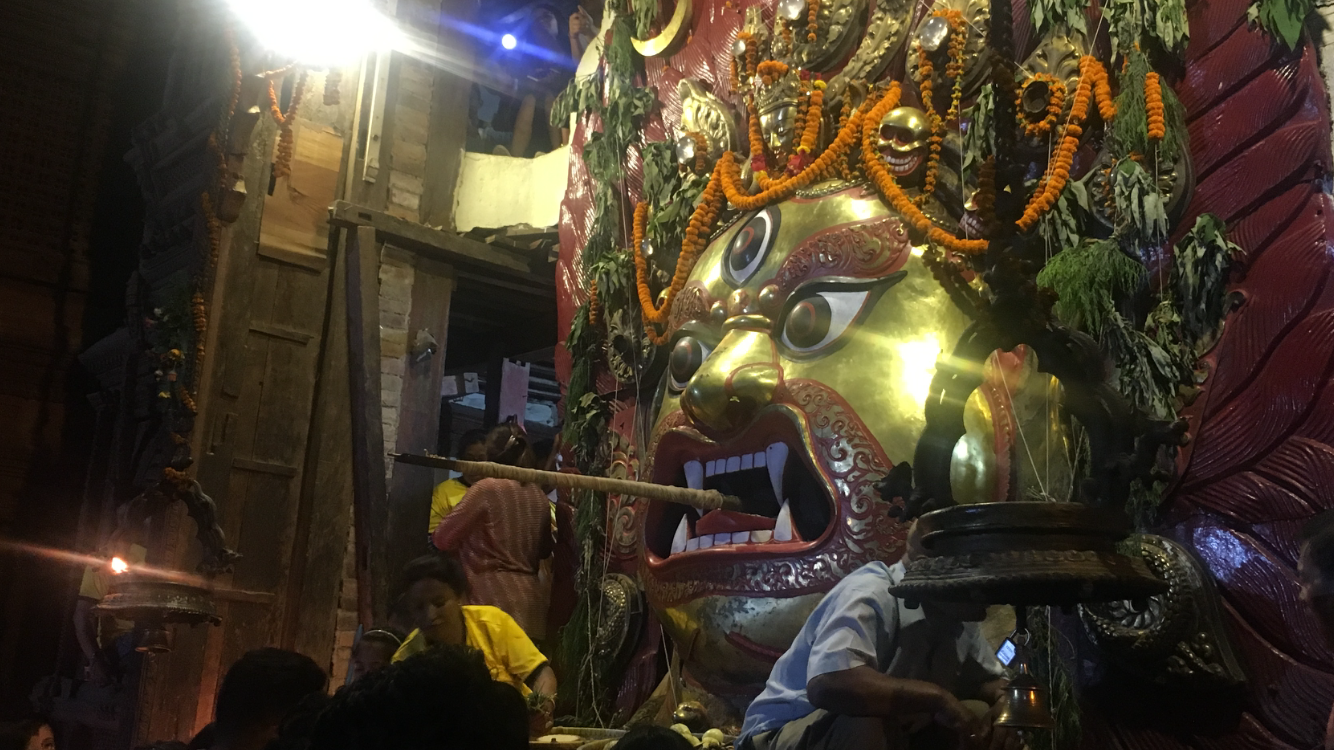 According to the legend, Lord Indra came down to earth to find the flower called Parijat because his mother wanted it and couldn’t find it in heaven. It was in Kathmandu valley that he found the flower and when he tried to steal it, the people caught lord Indra and imprisoned him. When Indra’s mother came looking for him, people were shocked when they realized what they did. They quickly released him and to calm him down, the people of Kathmandu valley dedicated one of the most colorful festivals of Nepal. Since then Indra Jatra is being celebrated every year to tribute to pay tribute to him. Indra Jatra is also honored to express gratitude toward Indra for the rain, especially by the farmers in the Newar community.

Indra Jatra usually falls in September and is celebrated for eight long days, and there are lots of interchanges and splendor all through the eight days of the celebration. The festival is all about rituals, singing, dancing, and feasting. The first day of Indra Jatra begins by erecting theYosin or Indradhoj Linga (wooden pole) in Kathmandu Durbar Square. During Indra Jatra, there are masked dances like Lakhey dance, Bhairav dance, Devi Pykhan, Sawa Bakhhu dance performed in different streets of Kathmandu accompanied by the loud sound of drums beating and also other traditional musical instruments. These dances are in the form of deities and demons and the most popular dance form being Majipā Lākhey. Another popular dance is that of Pulu Kisi (elephant) dance.  This white elephant here symbolizes Lord Indra’s carrier. The locals dance by wearing a white-colored elephant structured costume covering their whole body and running randomly in the streets. But the leading attraction of the festival is a chariot procession! In this procession, a giant chariot of living Goddess Kumari followed by two other smaller chariots of Lord Ganesh and Lord Bhairav. All three chariots are pulled along the main areas of Kathmandu by a bunch of people. And this day is regarded as the main day of Indra Jatra. The first day of the chariot procession is called Kwaneyā. On this day, the heads of the state also visit Hanuman Dhoka and pay respect to the gods and goddesses. This is also the day when family members of the deceased soul who passed away in the last one-year light butter lamps along the processional route and will also visit various shrines. This event is called ‘UpakuWangu.’ In the night, after Kumari returns from the procession, another procession of Dāgin beings. The second day of the chariot procession is called Thaneyā or Yenya Punhi while the third day is known as Nānichāyā. There is also another procession called Bau Mata Procession organized by a group of Newar community in the main streets of Kathmandu. Similarly, during Indra Jatra, there is also an exhibition of Samay Baji (sacred food) beautifully displayed in different areas of Kathmandu. The food contains various Newari food items representing luck, health, prosperity, and longevity. The final day of this festival ends with letting down of the Indradhoj Linga (pole) bearing Indra’s flag in the religious ritual known as Ya-Sin Kwathalegu.