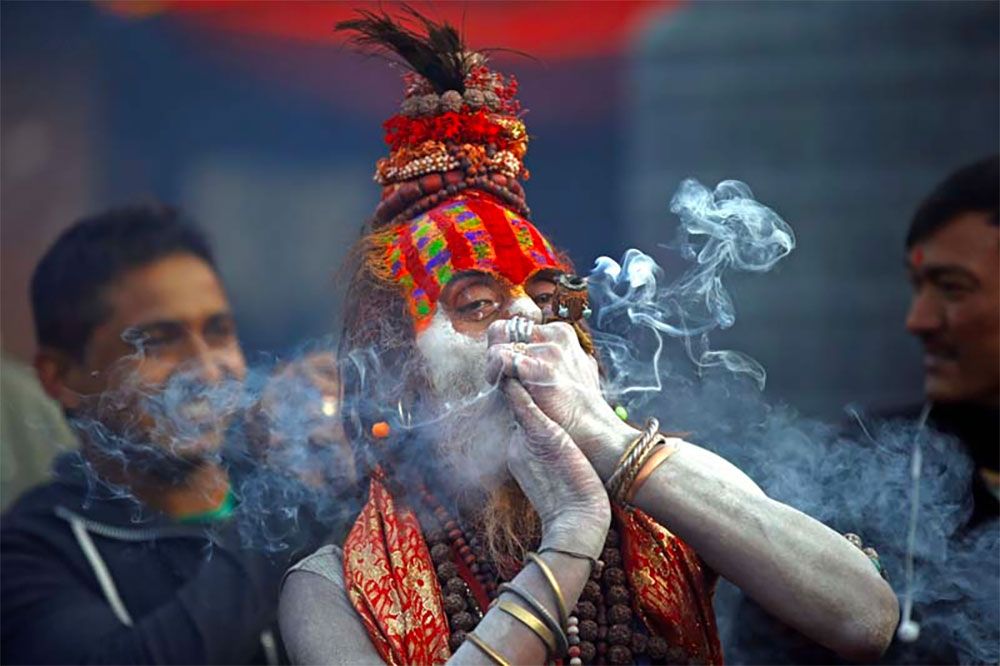 At home, people wake up before dawn to take a ceremonious bath using black sesame seeds-considered as pious which purifies the body, with the water and wear clean clothes. Few of the devotees would also smear bhasma( holy ash) on their forehead. They, then, worship Lord Shiva by offering Bael leaves ( also called Bilwa or stone apple or Bengal Quince, in latin  Aegle marmelos)  flowers, garlands, yellow paste, milk, water and fruits along with the chants of “Om Namah Shivaya” mantra.

Likewise, at the temples of Lord Shiva on the occasion of Maha Shivratri, special adulation is performed. In many temples, the adulation are conducted strictly according to the rules as mentioned in the Shiva Maha Puran- Hindu epic and the holy script that cites and describes about the Lord Shiva’s magnanimous glory and benevolence. According to which, Shiva Linga should be given ceremonious bath and puja at every three hours on Maha Shivratri.  Ritual rinsing are done using milk, yoghurt, honey, ghee, sandalwood paste and rose water. Each item is poured over Shiva Linga ( A phallus shaped rock representing Lord Shiva), to symbolize different meanings as milk stands for piousness, while yogurt symbolizes prosperity. Rinsing is done with honey to acquire a sweet speech, while ghee represents victory. Similarly, sugar symbolizes happiness and water is the symbol of purity. After the rinsing are performed, the Shiva Linga is adorned with a stalk of three Bael leaves, to mark the culmination of the previous ritual. Thereafter, vermilion (red colour) and kesari (yellow colour) is applied on the Shiva Linga. Apart from Bael leaves, One can see the devotee offering beetle leaves to the deity. Bael fruit is offered to the deity by the devotees. In the mean time, the devotees are indulge in immense chanting of “Om Namah Shivaya”. In addition, to the above puja aroma of incense sticks along with the sounds  of bells add to the festive mood in the temple.

Shiva Puja on Mahashivratri include several items such as vermilion, haldi (turmeric powder), Vibhuti/Bhasm (sacred ash made using dried cow dung), Rudraaksha Mala (prayer beads made of the dark berries of Elaeocarpus ganitrus, to chant Om Namah Shivaya), Akshata (uncooked rice) and a stalk of Bael leaves. Incense sticks, fresh flowers and camphor are other requisites for the pooja (ritual). Earthen lamp and lota (container filled with holy water) is also required for the pooja.

There is a belief that the devotion of Lord Shiva on Maha Shivaratri would free the devotee from the past sins. Moreover, the devotee would reach the adobe of Lord Shiva and live there happily, because he/she is liberated from the cycle of birth and death, once he/she attains moksha or salvation. Maha Shivaratri is especially important for women. Ladies both married and unmarried, would perform Shiva Pooja and observe fast with great devotion and sincerity. This is predominantly done to appease Lord Shiva along with his consort Goddess Parvati. It is believed that Goddess Parvati bestows marital bliss on unmarried women and blesses the married women with healthy and blissful married life.

There are several myths and legends regarding the celebration of auspicious festival Maha Shivratri. These legends throw light on the greatness and supremacy of Lord Shiva among all Hindu Gods and Goddesses as well as the importance of fasting and chanting the name of Lord Shiva, staying awake all night on Shivratri. Most of the stories can be traced to the Puranas  but a few important legends are detailed below where its eminent that most of the myths happened during night, that is why it is celebrated on night as the –Grand night of Shiva.

One of the popular legends of Maha Shivratri is related to the marriage of Shiva and Parvati. It tells us how Shiva got married a second time to Parvati, his divine consort on this particular day. This is another version of the legend, according to which Goddess Parvati performed tapas and prayers on the auspicious moonless night of Shivratri, for the wellbeing of her husband. Believing in this legend, married women began the custom of praying for the wellbeing of their husband and sons on Maha Shivratri, while unmarried women pray for a husband like Shiva, who is considered to be the ideal spouse.

There is another very popular Shivratri legend from Puranas, which explains why people stay awake all night on Shivratri and why Lord Shiva is also known as Neelakantha. According to the story, when the battle between devas (god) and asuras (devils) took place, a vessel of poison came out of the ocean and on the request of gods, Lord Shiva drank the poison. The poison was so potent that it changed the color of His neck to blue. For this reason, Lord Shiva is also called Neelkanth, where ‘Neela’ means blue and ‘Kantha’ means neck or throat. As part of the therapy, Lord Shiva was advised to awake during the night. Thus, to keep Shiva awake, the gods performed various dances and played music. Pleased with their devotion, He blessed them all, the next morning. Therefore, Shivratri is the celebration of this event in which Lord Shiva saved the world. There is also a scientific explanation for the celebration of Maha Shivratri Ratri is Dark which is Ignorance. Ignorance begets Fear. Knowledge begets Confidence. There are two forces acting on us and they are Positive Force and Negative Force. Faith is the positive force enriching Human life. Doubt is the negative force robbing of Glow and Meaning. Shiva means Movement/Action. Soul is eternal and it is a continuous process of identifying itself to The Supreme. Jyothir Ling in Kedarnath indicates the Gunas within us i.e. Tamas, Rajas and Satwik. If they are balanced, life is blissful.