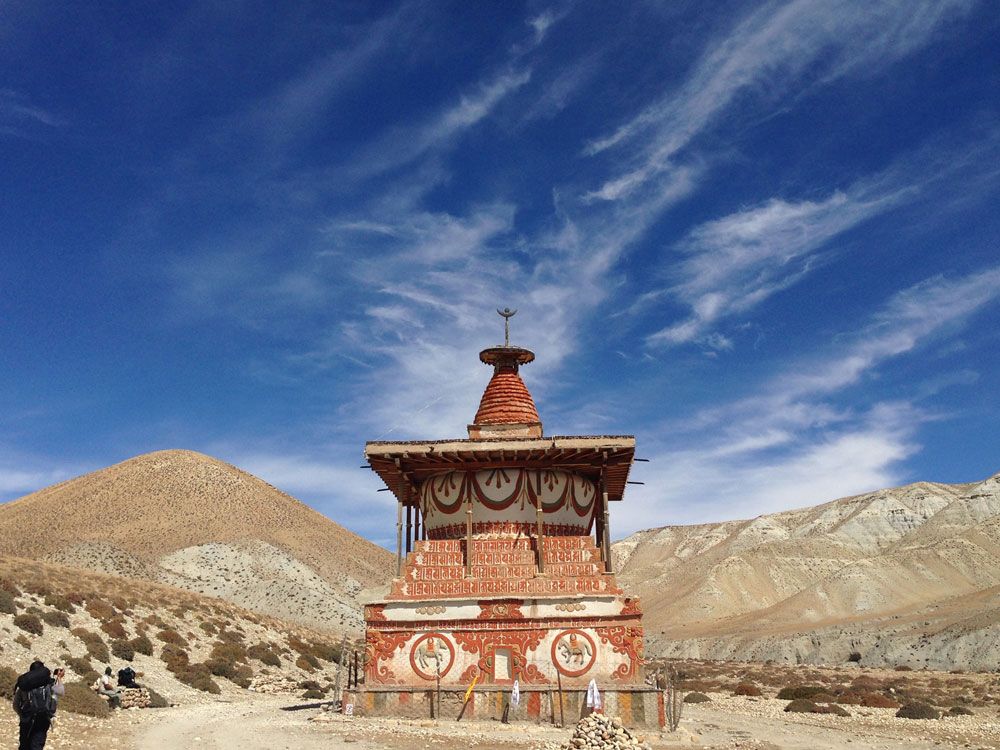 “Mustang is one of the few places in the Himalayan region that has been able to retain its traditional Tibetan culture un-assaulted. Authentic Tibetan culture now survives only in exile and a few places like Mustang, which have had long historical and cultural ties with Tibet.” says His Holiness the Dalai Lama This semi-autonomous, heavily Tibetan influenced region was described by Tilman as fascinatingly ugly country, the more fascinating for being so little known.” Indeed, the trek to Lo Manthang is through an almost treeless barren landscape, along a steeply undulating rocky trail, from which there are panoramic views of Nilgiri, Annapurna, Dhaulagiri and a range of other soaring peaks.

The small kingdom of Mustang, closed to westerners until 1992, is an enchanting land of windswept vistas, red walled monasteries, and feudal towns. Geographically and culturally more a part of Tibet than Nepal , Mustang contains a wild landscape of eroded cliffs and hidden caves .

According to the local agent, Padamasambhava-the great founder of Tibetan Buddhism, before building Samye (the oldest monastery in Tibet) came to Mustang to stand guard against and do battle with the evil powers out to destroy Buddhism. The temple of Lo Gekhar in eastern Mustang was built by Padmasambhava after his triumphant battle and still stands guard today. The journey to this mysterious lost kingdom begins with a spectacular flight from Pokhara to Jomsom, following the gorge of Kali Gandaki between the great mountain massifs of Annapurna and Dhaulagiri . We follow the Kali Gandaki River into the restricted area of Mustang and trek through remote villages, little changed by twentieth century influences.

Lo Manathang-the fortified capital city of Mustang , where the king of Musang resides is a 5 days trekking from Jomsom. We have time to explore the city and visit outlying villages to the north of the capital. All this through a landscape of indescribable vastness and beauty, home to the infamous snow leopard, the endangered bharal (blue sheep), and the mythical mehti (abominable snowman). Rimmed by 20,000+ snow-capped peaks and bathed in hues of orange and red rocks with sporadic fields of vibrant green, yellow and red of barley, maize, and buckwheat, Mustang is a step back to a simpler time. We take the chance to meet the king, who is a simple and friendly personality. Our return is via the rarely visited eastern side of Mustang and the ancient Gompa at Luri. Hidden canyons and stairways lead to the Gompa which contains unique wall paintings. Scenically unlike any other area in Nepal , a trek into the hidden Kingdom of Mustang is a uniquely rewarding experience.